When February rolls around on the calendar the entire year of calling can be summed up to one event: breeding season is the start of the whole foundation for the year of calling our favorite predator, the coyote. Every single event for the rest of the year is determined by this one event of love, leading to pups, growing said pups and kicking them out of the nest in September - November to do it again the very next year. Feb 15th is the peak of this event, but coyotes can breed as early as mid to late December all the way through to the end of March.

The weather and other factors will determine when a female is accepting, and her attitude and biological clock will factor variously across the entire continent. Calling this time of year can produce reactions that are amazing. It can also be frustrating to some who don't embrace the cycle that coyotes live. The rollercoaster they are on is an awesome ride if you learn to go with it and use that cycle to your advantage. FOXPRO is the equalizer you need to add fur in the later winter months. 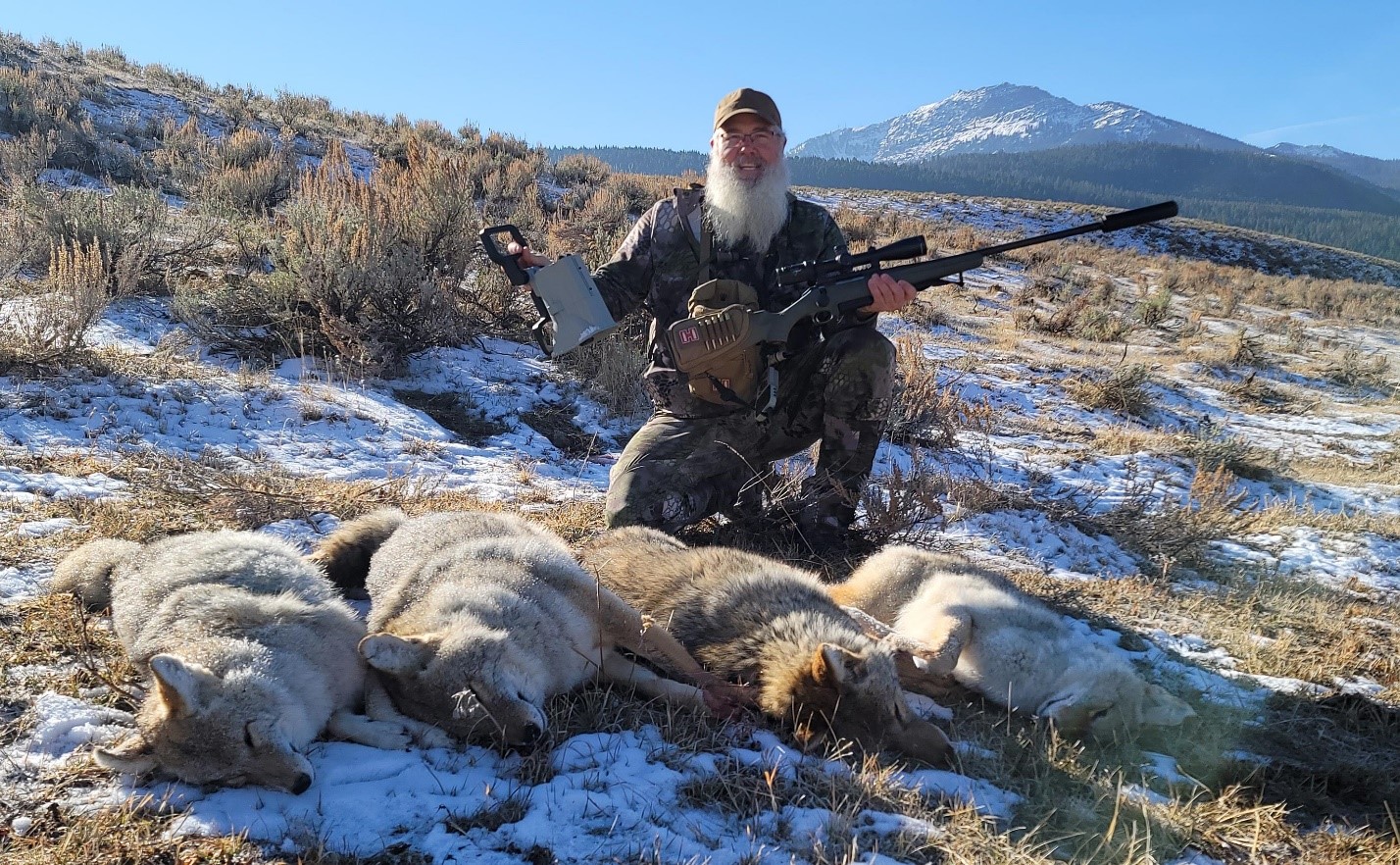 The peak of the "rut" for coyotes is Feb 15th. They have a 62-day gestation period just like their cousins, the domestic dogs. Knowing this you can plan your late season calling around a coyote's needs. The sounds at your disposal to use at this time on a FOXPRO is second to none, from January to mid-March I start every stand with single lone howls-C5 Young Pup Howl, Female Yodel Howl, Female Sore Howl, Male Coyote Howl. I also use my Gun Series Diaphragms to mimic a lone female coyote looking for a companion, broadcasting to the world I am a lonely coyote looking for anyone else in the world. That single moment, that single howl is the THE NUMBER ONE SOUND TO GET OTHER COYOTES TO COME LOOK AT YOU. You can't make any better sound to call in a coyote in this period; it is the principal way coyotes communicate with other coyotes. Therefore, it is king when it comes to getting coyotes to come look at you this time of year. There are 4-5 reasons coyotes will come to your FOXPRO. They are highly territorial, they need to eat, and they are protective of their pups and will come to protect them through the spring and summer. They will fight with one another over all these things, and they are curious. 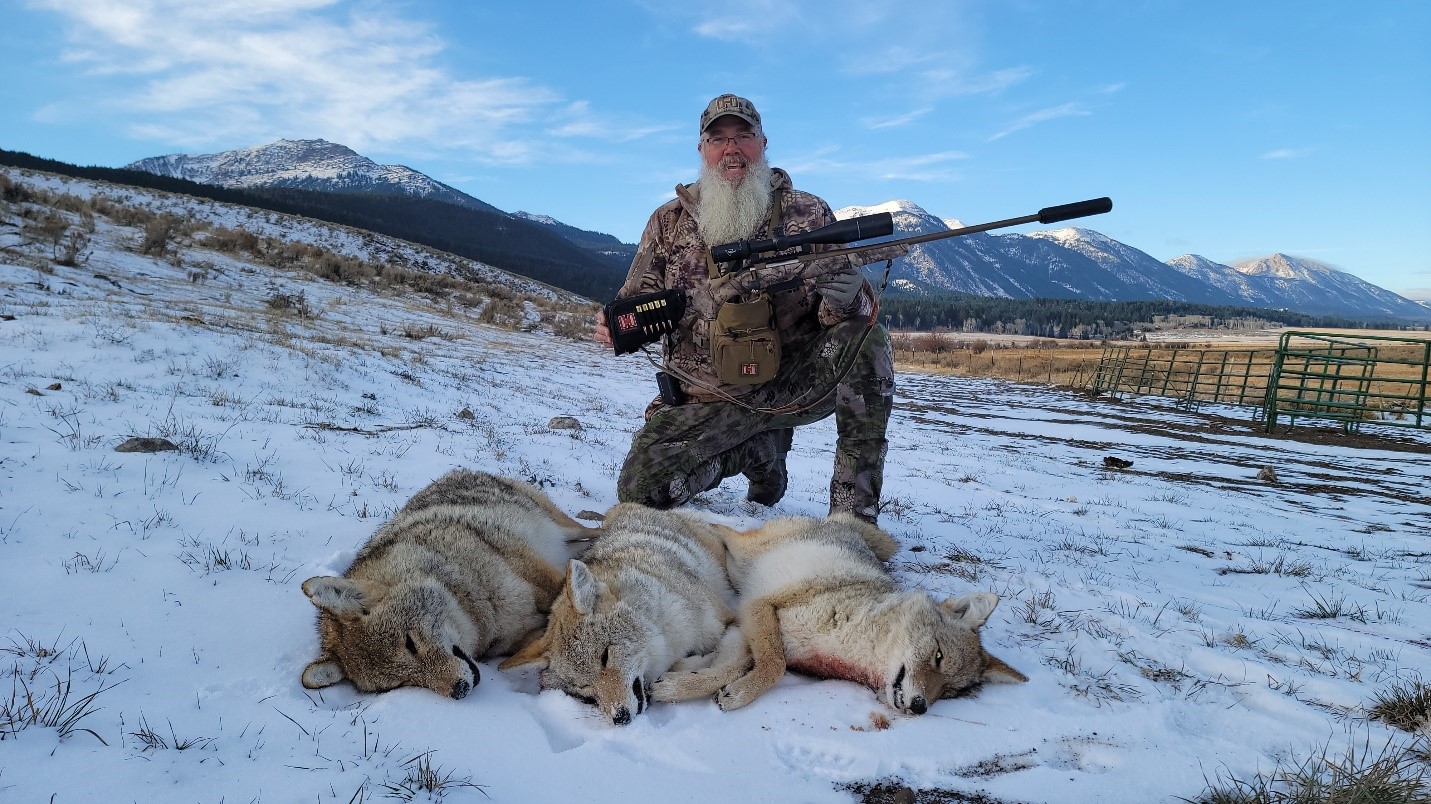 In January through March the main reasons they come together are for defending territories and to breed. They still need to eat but it seems to take a backseat to these other impending needs. After I open with a lone howl and have waited for a time..1-5 minutes...answered or not, I then have to make a second decision of what to do next. I have 700 options in sounds (from the largest sound library available on an electronic caller and the only ones made in the USA by hard working Americans) so I know with the best options available I need to decide. This time of year, I go right into AM Yips and Whimpers. FOXPRO invited me into the sound room and recorded me with my Gun Series Diaphragms and now you can take me with you every time you go coyote hunting. After I play that for a minute, I then can choose Pup Screams into a Gray Fox Pup Distress into Pup Distress 2. I purposefully space these sounds out because SILENCE KILLS AS MUCH AS SOUND...did you get that? I can't tell you the spaces because I'm not there at that time but the space between sounds is very, very important and can change from stand to stand. Use your experience and judgement and make the call.

At this point I have been on stand from 8-15 minutes and most likely have already pulled the trigger. If not, I go to Den Mayhem and I won't end all my vocals without a minute or two of Pup Distress 3. It is the finisher, the dagger, the Coup de Gras, the final nail in the coffin for many a coyote. If I only have a few stands to make and time to kill and I'm not in a contest, I will then at 15-20 minutes play a distress to appeal to their stomachs. I will play distresses I think they have not heard. I stay away from rabbits and focus more on birds like Nutty Nuthatch, Lucky Bird, or Woodpecker, House Cat Distress, Chicken Distress, Pheasant Distress. If you're hunting and area that gets called, they might have heard the Rabbits, but late season I go to lesser known/used distresses and have tremendous success.

Don't let late season calling and the trials that come with coyotes that have heard every rabbit and have been shot at deter you. They will still come to the FOXPRO if you will find that combination that will unlock them to come to gun range. You will love hunting those wily buggers year around and you will be hooked for life.

FOXPRO welcomes thoughtful comments from our visitors. All comments are moderated prior to publication. Please review our Comments Policy.

Use the form below to sign in and become part of the conversation. If you do not have an account on our website, you can create on here.