Mike Dillon mentioned in the July Newsletter that I would be writing a story about my Merriam turkey hunt in Montana. I won't get into the traveling itinerary as Mike has already told you all of that. The main purpose of our hunt in Montana was for Mike to get his first Black Bear. It was an absolute blast to be with Mike and watch as he connected on his first Big Bruin. However, Mike gave me the opportunity to test my skills with the elusive white-tailed mountain chicken, better known as the Merriam turkey.

We left the Hotel Thursday morning around 3:45am to drive to Belgrade to meet Troy Butler and Tim Delph for the first time. We waited patiently as the gray of daylight began to break. I know most of you guys are saying, "What, its daylight and you're not in the woods setup on a long-beard yet?" I thought the same thing but when Troy and Tim showed up they re-assured me that it probably wouldn't take more than about 30 minutes to go kill my first Merriam. That was enough confidence for me. Now I was ready to go. We jumped in the truck with Troy and Tim and started down the road towards the mountains. On our way there I couldn't help but to start realizing what I was about to do. I was going to have my first opportunity to kill a turkey that I have only seen video of on TV. I was excited to add another sub-species of the wild turkey to my resume', to hopefully someday accomplish what I have only dreamed of. The Grand Slam of turkeys, for those of you who don't know, it contains the Eastern, Rio Grande, Osceola, and the Merriam. There's no doubt I would love to have the Super Slam which consists of the Goulds turkey, but I knew I had to get this Merriam out of the way first. As we approached our destination the excitement grew with even more intensity when we saw a flock of birds on the middle of the road, that's right, right on the middle of the highway. There were quite a few gobblers in the flock and they had about 7 or 8 hens with them. I immediately made the assumption that they were hened-up and that I would have to use my soft calling to entice a long-beard into range. We didn't have permission to hunt this area yet so we continued to a place where Troy had spotted and scouted several birds. 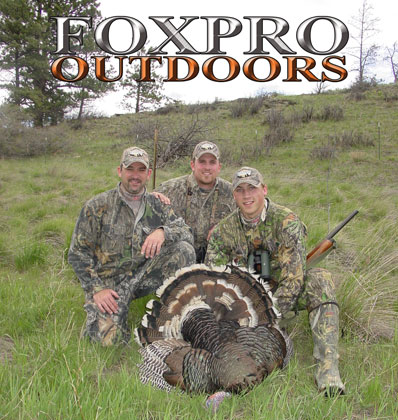 It was about 6:45AM and we pulled off the side of a dirt road on the top of a hill overlooking several mountains and meadows. Troy did a few series of yelps and I threw in an owl hoot. A gobbler cut loose about 300 yards away. I looked in the direction of the gobble and saw him strutting in a meadow with four hens. We quickly got back into the truck and drove past him on the dirt road. He must have been used to vehicles driving on this road because it didn't bother him at all when we drove by. We parked along the side of the road where a small ridge had blocked our view from him and his view from us. We conjured up a game plan and decided to try to call him out of the meadow to us. There was a huge point on a mountain that ran down into the meadow. The birds were on the other side of the mountain in the meadow so we setup to try and call them around the point. He answered us but he had moved to the top of the mountain. I tried numerous calling sequences and other tactics that I use on the eastern turkeys back home, but none of which worked on this old Tom. I guess this would be a good spot to indicate how much I love turkey hunting and who taught me all of the secrets.

I grew up in central Pennsylvania where turkey hunting for my family was a tradition and a game that we played every year with old gobblers and their seasonal rituals. My father taught me everything I know about hunting and for some reason, turkey hunting was one of his favorites. Many have argued that he was one of the best turkey hunters in the area, but only because he had hunted them for over 35 years and he taught me one key thing about hunting them. Patience, patience and more patience was the key. This is a character trait that I lacked growing up, but quickly learned that this was indeed the secret to success for hunting Pennsylvania turkeys.

The long beard answered me time and time again but never wanted to leave his delightful hens. We worked this bird from a variety of locations, playing cat and mouse with him for nearly two hours. The closest he got to us was around 55 yards. I misjudged the yardage and decided not to shoot because I thought he was farther away. The hens keyed in on our location, tucked tail, and left, so I figured my hunt was over. We tried locating other birds that morning, but could never get one to strike back up. We decided to head back to where we had seen the birds on the road earlier in the morning and ask permission to hunt them in the meadow that they were hanging out in.

As we approached the meadow just off of the road we glassed the birds out with our optics and saw that there were a few Jakes and three other two year old gobblers as well as the hens and the Boss Tom. Troy pulled up to the house to ask permission to hunt the property and it was granted. I never had the opportunity to call a bird in from across a wide open field or in this case an open meadow. We setup at one point and the Jakes snuck in on us as they always do. We ended up moving once again to get closer to the bigger birds and bumped the Jakes. Fortunately, scaring them didn't scare the other birds. Mike and I army-crawled to the top of a hill that had a few trees that cast just enough shadows to keep us concealed. The old Tom was courting his hens when I noticed another gobbler, just outside of the main flock, trying to steal one of the hens away. As most may know, these two year olds are similar to that of a satellite Bull Elk. They stay just out of the way from the big boy so they don't get their butts kicked, yet just close enough to steal away one of his honeys. These are the birds that will no doubt come running in to catch a stirred up hen if possible. I knew what this two year old was trying to do and I told Mike that the younger bird was going to close the distance.

I started with a few soft yelps to just test their temperatures. No response. I then began to get more aggressive with them to try to get a response. They immediately cut me off, so I proceeded to do the same to them. When I talk about taking a gobblers temperature, I mean try to figure out what he likes to hear the most. See what he responds to the most and stick with it. I had the younger gobbler closing the distance to within 100 yards. I cut and cackled at him the whole time. The older Tom stared in my direction in discontent, as he watched his partner creep closer and closer to the excited hen. Only this excited Hen had a Remington 1100 packed with a 3 inch No. 5 shot.

The gobbler slipped out of sight 75 yards behind a small hill. I told Mike to creep up over the hill in which we were seated on, so that he could get a better view, while I stayed alert to see where the gobbler would pop up. He showed up about 45 yards away on top of the hill. I purred at him to ease his lost look. He immediately gobbled and started walking and looking for his prized hen. I stopped him with a quick cluck, and he stretched his neck up high (Picture perfect), I clicked off the safety and BOOM! I had just harvested my first Merriam long beard. I had to use the cluck, click, BOOM line. That was one I stole from my Dad in which he used one day when I was at school and he harvested a turkey. He had the principal hand me an envelope in the middle of class that contained the breast feather of his turkey, on the outside of the envelope it read, "Cluck, Click, BOOM."

In conclusion I would like to thank Troy Butler and Tim Delph on guiding me on my first turkey hunt in Montana. I don't think I've hunted with anyone that could make me laugh as much as Tim while you're in the woods. Troy can flat out hunt, it's always fun to hunt with people that enjoy it and love it as much as you do. Thanks Mike, for giving me the opportunity as well. I hope to kill a Rio Grande gobbler next year to add another species to my quest for the Grand Slam. Last but not least I'd like to thank my Dad for teaching me more than the secrets of hunting, but the principles in life to achieve a great character and a hard work ethic. Most importantly he taught me to value God's creation.

FOXPRO welcomes thoughtful comments from our visitors. All comments are moderated prior to publication. Please review our Comments Policy.

Use the form below to sign in and become part of the conversation. If you do not have an account on our website, you can create on here.