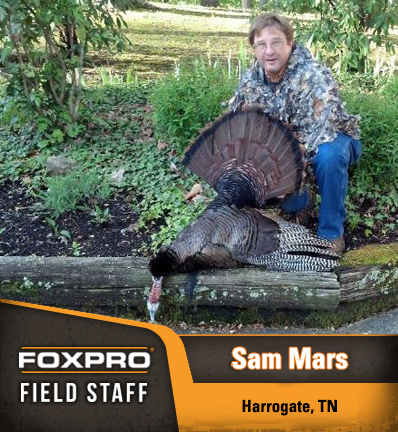 Growing up in the historic region of the Cumberland Gap where the boundries of Tennessee, Kentucky and Virginia intersect, Sam was introduced to the outdoors at an early age by his father who was an avid hunter and fisherman.  For Sam, it became a way of life.  He recalls carrying a single barrel 410 at the age of 6 and was bow hunting by the age of 13.

In his adult life Sam has avidly perused turkey, deer, elk, as well as other species and he hunts numerous states while doing so.  His passion and dedication for the outdoors and for conservation is well known.  He served on the National board of Directors of the NWFT for over 20 years including serving as chairman of the board for 2 years.  Sam also served on the board of directors of the TN Wildlife Federation for 14 years.

Sam resides with his wife, Debbie, in Harrogate, TN.  While his business interests are only minutes away in neighboring Middlesboro, KY.  One important note is the advantage Sam has by living where he does because he has three states to hunt within minutes of his home which gives him 3 opening days and 3 different bag limits for each species that he hunts.  Debbie has often said “Sam lives in paradise.”

No seminars or other events are scheduled for Sam Mars at this time.

Sam Mars does not have any featured images at this time.
×