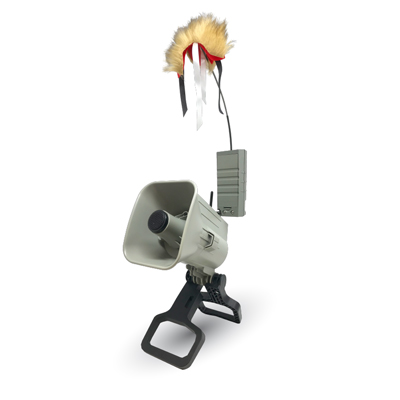 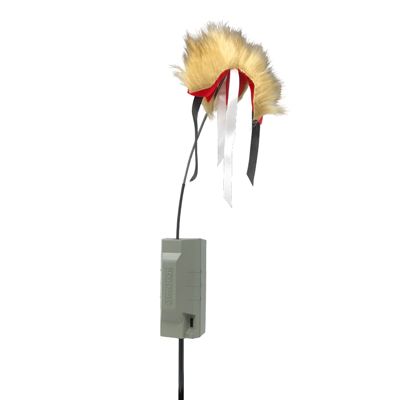 Position mouse over image to zoom.

Item is in stock

IMPORTANT NOTE Please note that you are purchasing only the decoy. The image shown with the Game Call is used only for reference of how the decoy mounts to the X-Series Game Calls.

The X-Decoy from FOXPRO turns your X-Series game call into an all-inclusive and portable predator-calling machine. Attach the decoy to the top of your X-Series call (must use as a stand-alone if using with XWAVE) and connect the decoy to the call by using the supplied Aux cable or wireless IR port connection (IR only available in later X-Series call models). The X-Decoy may also be used along with any other FOXPRO call (that has an aux jack) as a separate stand-alone decoy. Simply screw the included stake into the bottom of the decoy body and connect the decoy to your FOXPRO unit via the included Aux cord and Aux Jacks. The X-Decoy gives predators the visual confirmation they're looking for and listening for! It comes standard with a removable stake, Fuzzy Wuzzy topper, XHD speaker mounting hinge, and included allen wrench for assembly, stowed in the battery compartment. This decoy has a whisper quiet motor and Jacked Up Chaotic Motion for great action and realism. The X-Decoy has a 3 position switch that features 2 speed selectable motion (Off, High Speed, and Slow Speed) and is powered by 4AA batteries (not included). The X-Decoy is backed by a 1 year limited warranty and FOXPRO's unmatched customer support and is proudly made in the USA.

What's in the box?

1 Run times vary depending upon volume level, number of speakers being used (including external), temperature, and sound density. FOXPRO recommends the use of high-capacity rechargeable NiMH batteries for the best overall performance. Please note that alkaline cells are not recommended for use in temperatures below 32°F/0°C.

2 Limited warranty does not cover damage caused by misuse, abuse, exposure to water, battery damage including leaked batteries, and all other forms of physical damage.

3 Optimal range is had by ensuring clear line-of-sight between the game call and transmitter and elevating the game call off of the ground approximately 3 feet. Your results may vary.

WARNING: This product may contain lead, a chemical known to the State of California to cause cancer and birth defects or other reproductive harm.

What's in the box?

No videos available at this time

All submitted user reviews are displayed below. Scroll down to view all. To submit your own review, please click here.

XDECOY
(5 stars)
Timmy Carr in Eastern North Carolina on Sep 27, 2022 I like the motion this decoy has. The mounting to the X24 was easy and the fold down feature is nice for storing call with decoy into Foxpro bag quick. I don’t always run a decoy but it’s nice that it attach to call all the time. I don’t have to set up a separate decoy on each set, but this decoy is just a push button away if I need it to entice that hung up coyote/fox/bobcat.
XDECOY
(5 stars)
Don in Montana on Jan 26, 2022 Works as advertised. And attached to my ProFix call easily making a complete and convenient system.
XDECOY
(3 stars)
Frank Moncada in California on Dec 16, 2021 The X decoy works as intended easily controllable with the remote control Verizon I give it only three stars it’s because my X24 it’s not equipped with the IR reader so I have to use the audio cable that came with the unit I don’t think it’s fair that I bought one of the first units on the market and Fox Pro didn’t put the IR reader until later so basically I pay for the same features that other people got except I didn’t get it go figure you guys dropped the ball on this one