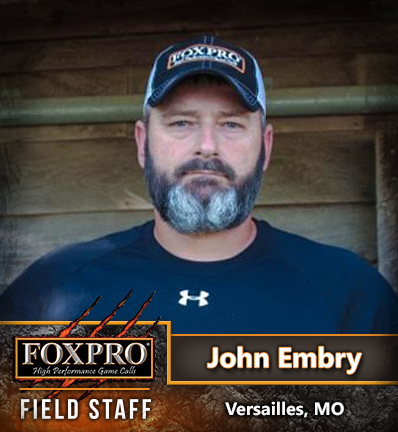 John Embry was born in central Missouri. He makes his home in Versailles Missouri with his wife, Stacey and their daughters; Ashlee and Lauren.

He has always had a passion for the outdoors. John has been in the woods chasing everything from deer to coons for over 30 years. Johns love of calling coyotes started one day while hunting with his brother Kent. They called a big bob-tailed coyote in to 20 yards and finished him with an old 16ga with slugs. That coyote was the first of many.

In 2012 John started Dog Hog Outdoors. John earned the name "Dog Hog" by shooting fast and hogging all the coyotes, at least that is what his friends say. Dog Hog Outdoors has provided an outlet for what he loves best; videoing and sharing his hunts. Sharing his videos has introduced him to a wealth of fellow predator hunters, locally and out of state. Hunting vacations have become the norm for John in the last couple of years, traveling to various states to hunt with friends he has made.

In 2012 John started using decoy dogs. He was the camera man for his first hunt using the dogs. John says calling in a coyote with a FoxPro cs24 and watching the dogs work is a rush like no other. After that first hunt, he was hooked. He immediately found a dog and started training. John currently hunts with two dogs.

If he is not out in the woods you might find him auctioneering or on the road taking care of customers for his business. The Embry family has been auctioning for 50 plus years. His dad Bill and the same brother Kent that took that first coyote with him work the family auction service. John also owns a water

No seminars or other events are scheduled for John Embry at this time.