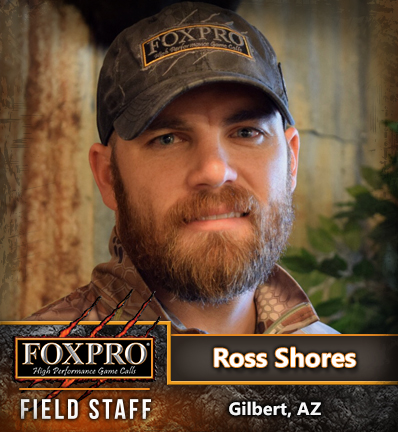 Ross was born into a hunting family and raised with hunting all around him. In 2nd grade, Ross helped his dad skin out an Arizona buffalo and from that moment on hunting would remain a staple in his life.

Predator calling found Ross his freshman year of college, when a friend at Montana State showed him how to use an open reed call. It didn't take long for Ross to call in his first coyote and from that moment on he was hooked.

Shortly thereafter his calling would have to be put on hold. Ross joined the Army in 2003 where he served 6 years. Sixteen months of that service was spent in Iraq. Even combat couldn't stop him from calling, and one night while out on patrol he even managed to call in a desert fox - something that will stay with him the rest of his life.

Once back in the states Ross quickly got busy calling, constantly challenging his skills and perfecting his methods. Soon, calling alone was not enough and Ross started the Call-In the Country video series. Call-In the County mixes entertaining video with informative tips and tactics to help others in their predator hunting endeavors. Sixteen years and hundreds of coyotes later, Ross is still in pursuit and spends every spare minute he has dedicated to the sport of predator hunting.

No seminars or other events are scheduled for Ross Shores at this time.