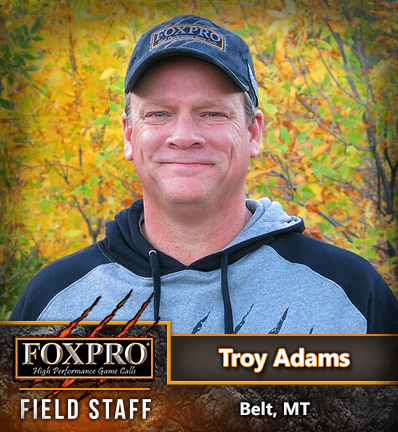 Troy Adams started walking at seven months. His mother said by 11 months he was running, and if you ask the local wildlife, he hasn't slowed done much since. The first critters he ever "hunted" were crabs on the island of Bermuda when he was three years old. Troy discovered that his little toy plastic rake was the perfect weapon for digging them out of their lairs and dispatching them.

Later, as a young boy in Arizona, he bravely defended his dog's dish from marauding house sparrows and starlings, air rifle in hand. At age 16 he killed his first coyote and, that very day, his passion for hunting predators was born. Thirty five years later the passion still burns as strong as ever. Troy has hunted everything from tiny kit fox to large black bears, from Alaska to Africa, as well as all over the western United States, Texas, and Canada.

Although Troy has hunted many different species of big and small game his favorite animals to hunt are predators. Black bear and coyotes are right at the very top of the list. He feels there is a thrill which goes with hunting predators, especially when they come into a call, that he cannot find hunting any other animal. Whether it is in the fall, winter, or spring, it is a sure bet that Troy will be out hunting coyotes or bear with his every free minute. Troy is married to his wonderful wife, Terri, who supports him in all he does. Together they are raising their six children: four boys and two girls. With that many mouths to feed and support, spare minutes are not overly abundant, but Troy has been able to strike a balance, between family, church, work, and his passion for hunting. One thing is for sure and for certain, the local coyotes sure do wish he would spend a lot less time in the field. Coyote calling is Troy's addiction and he is not looking for a cure!

No seminars or other events are scheduled for Troy Adams at this time.